A recent XpertHR webinar features employee handbook issues and reveals some rather interesting findings. Presented by Littler Mendelson employment attorney Chris Cobey, the webinar explores a multitude of legal trends, including paid sick leave, minimum wage changes and more. During the webinar, more than 550 attendees were asked a series of questions regarding their approach to employee handbooks in the workplace.

When participants were asked what is the issue of greatest concern to an HR professional, here were the results: 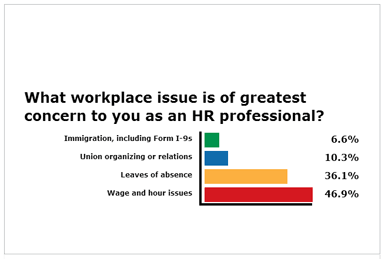 In commenting on the findings, Cobey said, “They confirm what many management-side lawyers have been saying: what troubles HR professionals’ sleep is dealing with wage and hour and leaves of absence issues. These concerns are subject matters in constant flux, and are the source of litigation and administrative charges on both the federal and states levels – and even now on the local level, with cities and counties setting up their own standards.”

These concerns are well supported. Over 30 new state and/or municipal laws took effect in 2014 or will go into effect in 2015. These laws cover all types of leave and vary markedly from state to state or city to city.

Wage and hour issues are also an appropriate concern as in the past year, about half of the states raised their minimum wage along with several municipalities. The Department of Labor (DOL) has indicated it is increasing its enforcement efforts and vigorously pursuing employers who violate wage and hour laws.

Meanwhile, a decisive majority of the attendees responded that they try to update their employee handbook at least on a yearly basis. 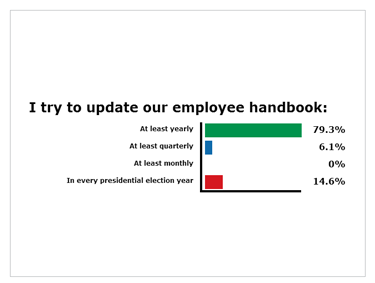 Cobey called yearly handbook updates the traditional best practice to remain compliant with the latest legal and regulatory changes. This is especially true in states like California and New York that have been active in passing new employment legislation. However, with handbook text easily generated and disseminated by electronic means, a small minority of respondents said they update their handbooks quarterly.

Another question asked where participants were most concerned about new workplace mandates coming from. 60% of participants cited state and federal agencies while 15.7% pointed to Congress, 12.3% cited state legislatures and 11.9% mentioned cities, counties and municipalities. 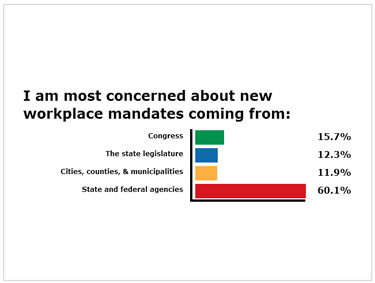 These results are a reminder that employers should remain aware of developments on the federal, state and municipal level as well as legal and regulatory changes and incorporate these into their employee handbooks to maintain compliance.

From the National Labor Relations Board’s recent pursuit of employee handbooks and social media policies, to the Affordable Care Act, to state and municipal laws on trending issues such as distracted driving, paid sick leave, e-cigarettes, ban the box and medical/recreational marijuana, it is important for employers to recognize and respond to all legal changes.

Finally, participants were asked how they ensure supervisors know of the changes to their employee handbook. 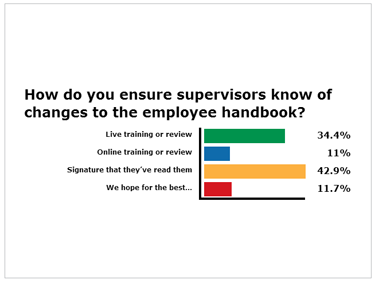 These results confirm the importance of having supervisors as well as employees acknowledge that they have received, reviewed, understood and consented to abide by the terms of the policies provided in the employee handbook. It is also critical to implement effective training on all policies and ensure that all supervisors and employees understand how they apply to the workplace.

You can listen to more valuable insights from Chris Cobey on employee handbooks in our free XpertHR webinar. Every two weeks, our on-demand webinar series features a trending employment law topic affecting HR professionals in the trenches.