Why the Future of Public Employee Unions is in Doubt 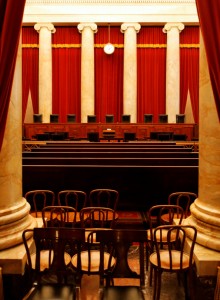 The Supreme Court recently heard a labor case with significant implications for the future of public employee unions nationwide. In Friedrichs v. California Teachers Association, a group of 10 teachers claim their free speech rights are being violated because they are compelled to pay dues to the state’s teachers’ union.

A new XpertHR podcast takes an in-depth look at this case, and why the Supreme Court may be poised to side with the objecting teachers. Such a result would represent a sea change not only for unions, but for the public employers that negotiate with them. As California Solicitor General Edward Dumont told the justices, the state needs the union to be adequately funded so it can work with the employer to make progress at the bargaining table.

Unions have long contended that the practice of collecting these dues from all workers is critical to their survival. They argue that requiring public employees to pay these fees is needed to prevent a “free-rider” problem of workers who benefit from collectively bargained higher wages without having contributed to the negotiation cost.

For nearly 40 years, since the Court’s 1977 Abood ruling, unions have generally been able to collect dues from all employees that they represent, so long as those dues are being used for collective bargaining, contract administration or grievance adjustment purposes.

During the oral arguments, Justice Elena Kagan said that overturning Abood could affect millions of employees and disrupt tens of thousands of labor contracts. But a narrow majority of her colleagues appeared unconvinced by the union’s contention.

Frequent Court swing voter, Justice Anthony Kennedy, was particularly skeptical of claims that compelled union dues do not unduly burden employee speech, saying the union was making these teachers ‘compelled riders’ for issues on which they strongly disagree.

“It’s odd to say that [employee] X is required to pay $500 for someone to espouse a belief that he does not share, that he is now free to go out and argue against it,” said Kennedy. “That means he has to spend another $500 so that it balances out? That makes no sense.”

The states are as divided as the lawyers were when it comes to these mandatory fees. In all, 25 states are now “right to work” states that prohibit mandatory union dues as a condition of employment. Wisconsin became the most recent to pass such a law in March 2015.

But public workers in other states, including of course California, can be compelled to pay these dues. Whether they must continue to do seemed like it might be in doubt following the oral arguments. A decision is expected before the end of the Court’s term in June.

In Other Supreme Court News…

The Court will soon wade into the thorny immigration debate and hear a hot-button dispute involving President Obama’s 2014 Executive Order affecting undocumented workers. On January 19, the Court agreed to decide whether the administration had the right to let undocumented workers request work permits and deportation relief for three years at a time if they have been in the US for at least five years and have children who are citizens or legal residents, among other requirements.

Texas and 25 other states challenged the order, claiming it unlawfully legislates immigration issues that are best left to Congress. They argued that Obama’s order would result in higher costs to the states, such as for issuing driver’s licenses and processing unemployment compensation benefits for the increased number of people who would be newly-eligible for work permits.

The 5th Circuit Court of Appeals agreed with the states, but the Supreme Court will now weigh in and hear arguments in April. You can be sure the presidential candidates will be watching closely.

Share your thoughts on the public employee union case, or what the immigration debate means for employers, with a comment below.