HR Intel: Bathrooms are the Battleground for LGBT Rights 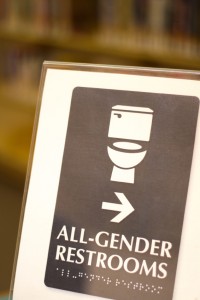 While the rest of the world focuses on things like the war in Syria, a massive refugee crisis, the US presidential election and the largest leak of whistleblower documents in history, some states are very, very worried about their public bathrooms.

In the last two months alone, Georgia, South Dakota, North Carolina and Mississippi have all passed or attempted to pass so-called “anti-LGBT” bills that are, at face value, focused on who can and can’t use public restrooms. But take a deeper look at the bills and their potential impact is clear: discrimination against people who identify as LGBT, but under the guise of privacy and protection for religious liberty.

South Dakota kicked off the fun by passing a “bathroom bill” that would’ve restricted transgender students’ use of public, gender-specific facilities like bathrooms and public school locker rooms. Governor Dennis Daugaard vetoed the bill on March 1, as the bill did not “address any pressing issue,” according to the governor.

Facing a similar bill and a torrent of threats from the business community, North Carolina Governor Pat McCrory signed the Public Facilities Privacy & Security Act into law on March 23. As per the ACLU, the bill was “rush[ed] through” the legislature and undoes all local nondiscrimination laws in the state by specifically excluding LGBT people from legal protections. Practically speaking, the bill allows private businesses with “religious objections” to deny services to LGBT people, a scary throwback to the days of separate bathrooms and drinking fountains for “colored” people.

The backlash for North Carolina has been swift and harsh – within days after the bill was signed into law, Google, PayPal, Lionsgate and Braeburn Pharmaceuticals have all either cancelled plans to expand into the state or are reconsidering their presence, costing North Carolinians hundreds of jobs at minimum. Apple, Facebook and Charlotte-based Bank of America have all pledged not to make any future investments in the state. Meanwhile, mayors and governors of other states, including New York, Vermont and Washington, have banned state-sponsored travel into North Carolina.

Georgia lawmakers attempted to pass similar legislation on March 16, but Governor Nathan Deal vetoed the Free Exercise Protection Act on March 28, stating that the state government does not have to “discriminate against anyone to protect the faith-based community in Georgia.” The state faced similar threats from the business community, including criticisms from Walt Disney, AMC, Marvel, Time Warner and Viacom. The NFL also warned Governor Deal that the league would not consider hosting the Super Bowl in Atlanta were the bill to become law.

Mississippi, on the other hand, does not have an NFL team (or a prayer of hosting the Super Bowl). Despite the criticisms from companies with a Mississippi presence like MGM, Nissan, Toyota, Tyson Foods, AT&T, IBM and Levi Strauss & Co., the Protecting Freedom of Conscience from Government Discrimination Act became law on April 5 when Governor Phil Bryant signed the bill. Amazingly, the bill allows private businesses in the state to discriminate against or refuse to hire any LGBT individuals, as well as unmarried individuals who have had sex or are actively engaged in a sexual relationship.

Governor Bryant said his objective was to “protect sincerely held religious beliefs and moral convictions of individuals, organizations and private associations from discriminatory action by state government.” The ACLU, on the other hand, countered that Governor Bryant “just made discrimination a part of state law.”

While this all plays out, several other states have anti-LGBT legislation pending, indicating the issue is not going away any time soon. For states where the law has passed, the trickiest aspect for employers is the fact that the laws protect individuals or companies with “sincerely” held religious beliefs or convictions. The issue then becomes: how can one practically discern between a sincerely held religious belief and one that is a mere pretext for discrimination against LGBT individuals?

To make things more complicated for HR, the laws protect the religious beliefs of individuals within companies as well, meaning, in theory, individual employees could elect to discriminate against their LGBT colleagues. This is true – even in the face of company policy to the contrary – and would, in theory, protect employees who discriminate from discipline or termination, so long as the religious belief that motivated their discrimination is “sincere.” Yikes.

California Governor Jerry Brown – always a busy man – signed a new minimum wage bill into law on April 4, which will raise the state-wide minimum wage to $15 over the next six years. The applicable wage under the bill will vary for employers depending on the size of their company, but the variations are limited to either $.50 or $1-per-hour pay discrepancies.

Not to be outdone, New York passed its annual budget for 2016-2017, but the budget includes a provision to raise the state minimum wage to $15 by 2018. Similar to Oregon’s recently enacted minimum wage bill, the applicable wage will vary by region within the state.

Michigan has carved out an exception for “franchisors,” protecting them from employment litigation claims that arise at the franchisee level. Michigan joins Wisconsin, Texas, Louisiana and Tennessee as states that specifically shield franchisors from liability, perhaps as a reaction to the NLRB’s “Browning-Ferris” ruling in 2015, which seemingly expanded liability for franchisors that cooperatively make decisions with franchisees regarding hiring, supervision, discipline and termination of employees.

The city of Austin, Texas will become the first city in the Lone Star state to “ban the box” for private employers. There is no statewide “ban the box” law for Texas, so the Austin ordinance only will apply to businesses operating within the Austin city limits that have 15 or more employees.

The National Labor Relations Board (NLRB) has ruled that Chipotle violated the National Labor Relations Act (NLRA) by forcing an employee to delete tweets that were critical of the company. Despite the lack of evidence that the employee in question was acting “in concert” with other employees in making public criticisms of the company regarding working conditions, the NLRB found that the tweets were “protected, concerted” activity.

Even more confusingly, the judge concluded that the tweets reflected “group complaints” even though the employee did not consult with other workers before posting them. This is an expansion of the “protected, concerted” paradigm as employees – in theory – no longer need to show evidence of concerted activity for their conduct to be protected under the NLRA. They merely have to show that their complaints about job conditions are applicable to others as well.

According to the California Supreme Court, employers in California are required to offer their employees a place to sit if the employee’s tasks can be reasonably accomplished while sitting. The decision resolved a class action lawsuit by CVS employees, claiming that the company made workers stand when the nature of their jobs didn’t always require it.

In the last edition of HR Intel, we asked you how “We Are the Champions” by Queen is relevant to HR. This song is commonly associated with sports triumphs, but it’s relevant for anyone who’s accomplished something fraught with challenges. Whereas the chorus of the song focuses on the victory or championship itself, the rest of the song discusses the trials and tribulations of triumphant teams or individuals, having overcome the obstacles that stood in between them and their prize.

We leave you with “People Are Strange” by The Doors.