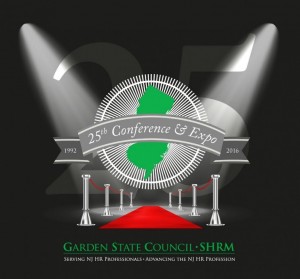 I had the privilege of attending the 25th annual Garden State SHRM Conference and Expo over the weekend in Atlantic City, where some of the brightest minds in HR got together to talk about hot topics in employment law for 2016. With over 60(!) hour-long sessions on topics ranging from global HR compliance to tactical response for HR matters, it’s staggering to think about how much learning was accomplished in such a short period of time across such a huge group of attendees. But this is a blog and our collective attention spans are relatively short, so bear with me if I boil the entire weekend down into one digestible nugget: HR is advancing by leaps and bounds and is far more educated, enthusiastic and strategic-minded than ever before.

The opening keynote – Significance in Simple Moments Because No One Remembers Boring (a comedy and magic show) was extremely entertaining, but it also planted a seed: every conversation, every performance evaluation, every conflict and every seemingly-innocuous moment on the highway (more on this later) – they all matter so much. The impact of each of those moments will be felt when it comes to how successful you are in your role within HR, how you are perceived by your colleagues and frankly, whether you survive at all.

The next morning, I dove headfirst into the HR trenches for Surviving the HR War with Stefanie Riehl, an HR consultant for the New Jersey Business & Industry Association (NJBIA). Stefanie’s presentation was stacked with real-life questions from employers dealing with challenges in the modern workplace, ranging from leave accommodations for an in loco parentis adult to disability accommodations for employees who are or become unable to drive.

From there, I tackled Internal Investigations presented by attorney Steven Adler of Mandelbaum Salsburg in New Jersey. Mr. Adler is not only a fellow barrister, but also a fellow football fan, which meant that his presentation drew numerous analogies to the NFL’s failings in its internal investigations regarding Ray Rice and Tom Brady. Afterward, Fox Rothschild attorney Ian Siminoff presented on Hot Topics in Employment Law, where the New Jersey Law Against Discrimination (LAD) and Conscientious Employee Protection Act (CEPA) played out in real terms across dozens of court cases from January through September 2016.

I then attended the Young Professionals reception where I encountered HR thought leaders like John Baldino (@jbalive), an HR Pro with Humareso (an outsourced HR solutions provider in New Jersey) and David Horning (@thedavidhorning) a comedian and fellow presenter who advocates overcoming obstacles through comedy and an examination of perspective among many others.

Finally, I presented to a group of remarkably-awake-for-8:30-a.m. HR professionals and consultants on Why Mergers and Acquisitions Fail… and How HR Can Help, an attempt to take a step back from the tactical and get strategic. We theorized how to harness data analytics and standardize protocols for a large-scale merger or acquisition while attempting to account for the myriad of local, state, federal or international compliance boundaries that could pop up along the way.

We discussed successful acquisitions and mergers gone wrong and took a moment to reflect on the fragility of life as well! That’s right, your very own HR Intel writer was almost killed while traveling to Atlantic City when I was rear-ended on the Garden State Parkway by a driver traveling upwards of 80 miles per hour. And what better way to illustrate what can happen when two incompatible entities are smashed together without the right amount of analysis, due diligence, planning or execution?

In the end, I came away with both compliance knowledge and wisdom: the little moments always matter, but don’t be afraid to think big.

Chipotle is hiring 5,000 employees. In a single day. On September 28th, Chipotle plans to add thousands of employees to its ranks. And how does it intend to accomplish that? Walk-in interviews at all Chipotle locations from 8 a.m. to 11 a.m. and from 3 p.m. to 5 p.m. Kudos to Chipotle for not running these interviews during the lunchtime burrito blitz.

Speaking of blitz, the holiday shopping season is on the horizon and that means… yeah retail brick and mortar is still dying, but couch-shopping sure isn’t! To prepare, FedEx is hiring 50,000 employees (buoyed by already-strong stock performance) and UPS is hiring a whopping 95,000 employees.

To be fair, I should mention that Target is also hiring 70,000 workers, but only 7,500 of those will be dedicated to the “distribution and fulfillment facilities.” In my humble estimation, Target is not getting the “if you can’t beat ‘em, join ‘em” philosophy just yet, but I’m betting they will eventually. After watching rival Wal-Mart acquire Jet.com, the writing is on the wall.

Combined, FedEx and UPS will deliver almost a billion packages to American consumers during the peak holiday season, sparing us from innumerable stressful moments and life-threatening experiences on the roads and in shopping centers across America. And just imagine, someday all of these shipments will be handled by robots.

Speaking of robots taking jobs away, Uber debuted its robot-driven cars in Pittsburgh recently, but rest-assured all of you… humans, we’re still pretty far away from robot taxis. Uber had only four cars being tested for this project, and each was equipped with two humans sitting in the front to take over operation of the car should something go wrong. Oh, and the lucky passengers were asked to sign waivers of liability before entering the vehicles. Talk about riding in comfort.

Of course, taxis and passenger travel are not the only industries at risk of being overrun by robots. The agricultural industry is increasingly looking toward self-driving farm equipment like tractors and combines. Digitaltrends.com calls these vehicles the “terminators” of the farm industry because of how cool they look, but they are anything but. Apparently something like 30% of the berry crop in California this past year wasn’t harvested due to a lack of available labor. It’s very likely that robot farmers can produce vastly more food for our nation and the world (stay tuned for the environmental impact), but the loss of yet another industry typically staffed by humans could be cause for concern.

Speaking of a dystopian robot future, German pharmaceutical giant Bayer is in the process of acquiring everyone’s favorite genetically modified organism (GMO) producer, Monsanto. I would make a sardonic joke about what could go wrong when you combine a drug company with a food company, but no. It just makes me sad to think about it. Thankfully, there is a ton of red tape for these companies to cut through in order to achieve their marriage including both American and European compliance regulations. I’m personally wondering how they’ll get past the fact that many of Monsanto’s products are outlawed in Europe, but there’s no problem that $66 billion won’t fix.

Fox is suing Netflix for poaching employees, accusing the stronghold of streaming of a “brazen campaign to unlawfully target, recruit and poach valuable Fox executives by illegally inducing them to break their employment contracts with executives.” Only a lawyer could write something like that. At the heart of the dispute are employment agreements that may or may not have expired at the end of 2015.

The Wells Fargo scandal is only just beginning. After getting slammed by Senator Elizabeth Warren, embattled CEO John Stumpf has agreed to forfeit his $45 million compensation package and Carrie Tolstedt, one of the senior executives in the division where the scandal occurred, will forfeit about $19 million worth of stock. That doesn’t include the $185 million fine levied by the Consumer Financial Protection Bureau (CFPB), the largest-ever penalty issued by the agency. But all of that pales in comparison to the most worrisome possible scenario for Wells Fargo: a $7.2 billion class action lawsuit against the bank by former employees who claim they were fired after complaining about the scheme.

In the last edition of HR Intel, we asked you how The Star Spangled Banner is related to HR. Obviously this song was chosen amidst the turmoil over visible protests around the national anthem pertaining to the treatment of African Americans by police, but I think it’s important to remember something called cognitive dissonance – the idea that it’s perfectly OK and normal to hold two different or opposing ideas in your head at the same time. In this context, it’s OK to love your country and think that it needs to get better at the same time. Nobody ever said (with a straight face or a red power tie) that this country is perfect, but at the same time, there’s a reason people risk life and limb to get here. We can love it and expect better of it at the same time.

We leave you with “Good” by Better Than Ezra.