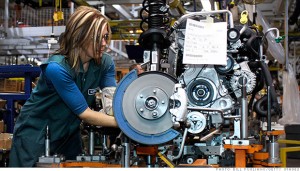 How ironic is it that the campaign slogan which helped propel Bill Clinton to the presidency in 1992 is now being cited as the reason his wife, Hillary Clinton, lost the election 24 years later? As they say, history often repeats itself, but we don’t always learn the lesson.

The Washington Post has a breakdown of how and why the Rust Belt went so strongly for Trump and repudiated Secretary Clinton. Surprise! The answer is jobs. Specifically, American manufacturers erased five million domestic jobs from the payrolls of Rust Belt companies since the year 2000. No states were hit harder during this time than Ohio, Michigan and Pennsylvania. Maybe voters in those states were sort of upset about that? Well, one candidate promised them the moon and the other hardly even came to visit very much outside of Ohio. So with the benefit of hindsight, it’s easier to see why these states turned red.

But now is when things get interesting, because voters expect President-elect Trump to deliver on the promises he made, particularly as they pertained to manufacturing jobs. Some economists say that voters directed their ire at the wrong bogeyman – big government embodied by Hillary Clinton – when they really should have been focused on robots and automation.

Inevitably, blue collar jobs will disappear in favor of automation, regardless of who sits in the Oval Office. In place of traditional blue collar jobs will be technical jobs that require significant education and technical skills: computer programming, engineering, electronics, machine learning, etc. Are disenfranchised Rust Belt voters planning to go back to college or are they hoping that President-elect Trump is going to stop technology in its tracks?

And then there’s coal country, where President-elect Trump campaigned on promises of restoring coal to glory and the evolution of “clean coal,” but again, are those jobs really coming back? The price of oil and natural gas is low enough that mining for coal is not really profitable like it used to be. Even China has scaled back on its efforts to mine coal in favor of other, cleaner forms of energy. Are we to believe that we’re going back to the age of burgeoning coal mines and smoke stacks puffing out billows of smoke? All while the world gets objectively warmer and warmer?

There is a lot of tension here, but HR has an important role to play. In the near future, HR may be called upon to identify jobs that are considered redundant or less “necessary” in light of new technologies, but in the distant future, HR departments might manage teams comprised of both humans and robots. How we bridge the gap from now to then, and whether society goes willingly into the inevitable robot-driven future, depends a lot on how smoothly the transition goes. And it has already started.

Turns out that “final” rule on overtime wasn’t final after all. As Yogi Berra famously said, “It ain’t over ‘til it’s over.” Well, now it’s probably over and it ended badly for proponents of the new rule, which would have doubled the minimum salary threshold for 4.2 million American workers who are exempt from overtime. A federal judge in Texas pulled the rug out from under the DOL’s new rule last night, blocking the new rule from taking effect on December 1st. The rule faces an extremely unfavorable future with the next administration, so it’s safe to say that a change of this nature to the minimum salary threshold is no longer on the horizon. I’m sure it is frustrating to have prepared for this change, only to see it go up in smoke, but employers are the big winners here as they no longer have to plan for this kind of fiscal disruption.

Despite the cancellation of the final rule, overtime issues are not simply going away. And if you think political campaigns are immune from overtime regulations, think again. Workers for the Democratic National Convention formed a class action to sue campaign organizers in Pennsylvania for allegedly refusing to pay them overtime. The workers claimed they worked upwards of 80 hours per week leading up to the election. Not only did they not get the result they’d hoped for, but they also didn’t get paid.

Speaking of seismic events, labor and employment might change a lot in the next four years under a Trump Administration, but Fast Company says the major changes will be focused on wages, immigration and labor relations. Specifically, there could be some movement on the federal minimum wage, something Trump has said he wants to tackle. Likewise, there is sure to be movement on immigration-related business practices like H1-B visa applications, low-wage labor and international assignments.

The CEO of GrubHub, Matt Maloney, is under fire for his post-election email to company employees, telling them that if they didn’t agree with his political views in light of Trump’s victory, that they had “no place” as an employee of GrubHub. Maloney then walked his comments back a bit, perhaps because he or his colleagues realized that such comments could be construed as violations of the law against discrimination for political activities in various places where GrubHub does business. Whoops.

Yahoo takes a crack at how the gig economy will be impacted by the Trump Administration in an environment where 80% of large companies are looking to expand their “contingent” workforce. Practically, the federal government doesn’t have much control over the business of independent contractors or the companies that employ them. It’s the states and municipalities that those companies have to worry about primarily in terms of oversight and regulation. What the Trump Administration can do, however, is usher in changes to the tax code that would benefit independent contractors, easing their burden and, in turn, the burden on companies that employ them.

Can striking workers use racial slurs to target replacement workers under the protection of the NLRA? The NLRB says maybe. Employers may only fire workers for picket line misconduct if it would tend to coerce or intimidate employees in the exercise of their rights under the NLRA. Speech, no matter how hateful, is protected by the NLRA. In this case, the NLRB gave the behavior in question a pass because it allegedly was not “violent in nature” and it was not accompanied by “any threatening behavior.”

University of California San Francisco tech workers filed a complaint with the California Department of Fair Employment and Housing, alleging widespread discrimination throughout the UCSF IT department on the basis of age, national origin, sex and race. The final straw for these workers was perhaps when they were all fired, but asked to train their replacements – employees of an Indian outsourcing firm – before formally terminating their employment.

The Softer Side of HR

Canadian beer maker Labatt is cutting one of its most precious employee benefits: free beer for life for employees who qualified and retired under the Labatt banner. Existing employees still get free beer in various forms, but for those who have moved on to greener pastures, the bottomless keg no longer exists. Now that Labatt is part of the AB-Inbev beer mega-conglomerate, perhaps such perks and the open-ended uncertainty they bring are no longer economically feasible.

If you think you’ve heard it all, check out 2016’s “craziest” excuses for calling in sick (slideshow alert). My personal favorite was the employee who claimed he accidentally ate cat food instead of tuna and grew deathly ill. So it’s not so much the-dog-ate-my-homework but more I-have-a-feline-palate eh? Yet another reason why it’s so hard to keep up these days.

In the last edition of HR Intel, we asked you how “Faith” by George Michael is related to HR. Turns out, this song isn’t about having “faith” in your fellow man or “faith” in the system or anything like that. Actually, this song is about taking a leap of faith, and that’s exactly what the narrator of the song intends to do, in order to get away from his significant other. In short, he (musically) needs some time off from that emotion. He’s been scorned, he’s been spurned, he’s been promised the world and you didn’t deliver. So he has faith that there’s another, better option out there, even though you’re (musically) askin’ [him] to stay, and saying please please please don’t go away.

In light of the results of the 2016 Presidential Election, this song seems eerily prescient. Some voters were so fed up that they were willing to take a leap of faith into the oblivion, thinking that anything would be better than the economic status quo. About that, we will certainly find out.

We leave you with “Come Together” by The Beatles, performed here by John Lennon, live in New York City in 1972.