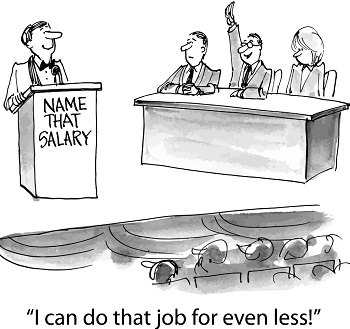 Employers may want to think twice before asking job applicants about their current or past salaries. Nine jurisdictions have passed laws banning or restricting such questions, most of them doing so in 2017. And the trend appears certain to continue in the coming year.

States that have passed salary history question prohibitions of varying breadth include:

And that’s in addition to laws passed in New York City, Philadelphia, San Francisco, Albany County, New York, and Puerto Rico, not to mention legislation in the works elsewhere.

On my latest XpertHR podcast, Fisher Phillips employment attorney Cheryl Pinarchick discusses the common thread among these laws – reducing the pay gap that exists between men and women in many parts of the US for doing comparable work. “The rationale is that pay discrimination can follow employees from job to job throughout their careers, which can result in a systemic reduction in their earning power,” says Pinacrchick, a founding co-chair of her firm’s Pay Equity Group.

A good amount of confusion has arisen among interviewers about what they can and cannot ask when it comes to compensation. Pinarchick notes that asking about salary expectations, as opposed to salary history, is what she recommends.

“It’s a good way to figure out whether it’s worth it to continue with an applicant,” she says. “Are they even in the right ballpark for what the job is going to pay?”

Pinarchick adds that certain other questions are still permissible. For instance, an employer likely may still ask about someone’s sales history or billable hours without running afoul of a salary history law. She notes that there may be legal justifications for paying people differently, and some of that will be based on performance.

A few of the salary history laws do permit employers to ask about an applicant’s current salary for verification purposes after a conditional job offer has been made. But Pinarchick questions why they would ever do so.

“My question would be what are you going to use the information for? You’ve already made an offer and placed a value on the job,” says Pinarchick. “I would caution against doing that.”

The varying laws make this a problematic area for multistate employers. As Pinarchick acknowledges, it’s a bit of a petri dish right now as the states try to figure out what will work. But despite the fact that the Equal Pay Act dates back to 1963, she notes that the pay gap between the sexes persists and that “something needed to change.”

With more salary history question bans surely on the way, the Boston employment attorney offers these tips for employers:

For more insights from Pinarchick on this growing issue, don’t miss “Why Salary Bans Are on the Rise.”