HR Intel: What is the HR “Link” to Blockchain Technology? 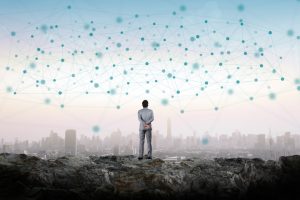 Blockchain is a virtual network of data that operates by authenticating transactions and storing a permanent public record.

At some point in the not too distant future, “Blockchain” technology will revolutionize how we do business. That isn’t so much a prediction as it is a certainty, as the technology itself (not necessarily the various “currencies” that have grown out of it) is likely to be the next major evolution of how we communicate and ultimately, transact business. Much like what “email” was in the 90s, “dotcom” in the aughts and smartphones in the 10s, Blockchain is a truly disruptive (in a good way!) technology.

Imagine for a moment that instead of physical server “towers” (like the monolith from 2001: A Space Odyssey) storing and controlling access to business data, your own PC was part of what is essentially a virtual server. The server then becomes “decentralized,” and instead exists on a vast and entirely virtual peer-to-peer network. It’s the cloud, but without the physical storage structures to back it up. That network, using the combination of software and artificial intelligence from which it is created, authenticates any transactions made on the chain, to ensure they are valid.

That, in a crude nutshell, is “Blockchain” technology, the driving force behind the “cryptocurrency” movement that’s been in the news recently. But how might the technology itself – aside from the currency – be relevant to HR? Glad you asked! Strap in.

The key to how Blockchain works is the authentication process. The system is designed to only allow “authenticated” transactions to be made on the network and renders it impossible to change or delete old data. You can never alter or remove anything from the chain, only add to it. That ensures a permanent and visible public record of all activities and information in the past. That data is secured by the decentralized network, so they are (in theory) much better protected from being altered, stolen or hacked. One potential use case for this is checking identity, as data points like your social security number, birth date, address and phone number create various opportunities for the chain to spot inauthentic claims or transactions.

So now imagine you’re hiring, and you use Blockchain for job applicant screening. A job applicant submits his or her resume for an open position, but the chain itself can now verify that he or she has the requisite qualifications for the job and can test the validity of the applicant’s provided history. This effectively screens out unqualified applicants by identifying “invalid” transactions (the applicant fraudulently claiming tenure with a certain company he/she never worked for) which might otherwise have required quite a bit of human sleuthing.

Further into the future, things like “smart contracts” will become a possibility as well. So if a restrictive covenant forbids an ex-employee from soliciting your clients, it will self-enforce by scanning databases for business transactions between those parties and if it finds an improper dealing, automatically forfeit the ex-employee’s access to a certain cryptocurrency wallet that they had access to. That might reduce (or even eliminate!) the need for attorneys to enforce a broken contract.

And Then There’s AI

Then, of course, there’s Artificial Intelligence (“AI”), which is growing exponentially in… intelligence, its impact on Blockchain and ultimately, its adoption for HR purposes. According to a survey by HR.com, 40% of HR professionals said their organizations would make “heavy use” of AI by 2022 and 53% said that their employees will increasingly take direction from AI technology. That can be accomplished by having Blockchain “triage” business tasks, authenticating only the assignments that go out to employees based on the strongest likelihood of success or efficiency output.

The flip side of that equation is the AI either getting ahead of human intelligence or getting carried away with its power. Experts say that AI can already accurately predict an individual’s sexual orientation just by looking at one photograph. That is alarming because it presents an opportunity for biased individuals to build their bias into the system, essentially poisoning the well of what would otherwise be valuable information. And that can lead companies directly into disparate impact discrimination lawsuits, where the lucky defendant gets to argue they never intended to discriminate but nevertheless oversaw ongoing discrimination because the computer did it. That’s the dog ate my homework version of an employment lawsuit defense.

It is a brave, new technological world out there. A few years ago we were trying to grasp the impact social media would have on our businesses and now we can’t fathom interacting or marketing without it. We used to complete most of our transactions with actual paper and now we’re increasingly moving toward tablets.

Companies increasingly require strategies and technology to optimize their digital workplace communications, but they are not always aware of the risks and compliance concerns created when they scale a new technology. The best we can do is educate ourselves, stay current and open our minds to the possibility of new technology making our lives both easier and more anxious at the same time. Those that can stomach the roller coaster while keeping their eyes on the prize and their HR spidey sense finely-tuned will ultimately prevail.

We’re still feeling the effects of the Harvey Weinstein scandal (with numerous claims coming out on a daily basis), but in the second full month of this phenomenon, a lot of the complaints and victims have gone back into the shadows. That is evidenced, in part, but the proliferation of the #metoo movement, where victims of sexual harassment and assault tag their posts with the hashtag to indicate that they too were victimized, while maintaining some anonymity. Add that to the social media cauldron, and it creates some compliance concerns.

First and foremost, HR should be aware of how they heard about the post. If you saw it yourself, chances are you had legal access to it to begin with. You follow the person on Twitter, their feed is public, you’re one of their Facebook friends, etc. But if you heard about it from someone else, then you need to tread lightly. You can’t solicit people to tell you about another person’s private social media account without running afoul of the Federal Stored Communications Act, for example, but if they come to you with the information unprovoked, it’s probably OK to take action.

Then the question becomes whether the complaint is being made about a supervisor or not. That is a crucial consideration when it comes to how quickly to respond or even the nature of the response. In either case, HR should react quickly, seek clarification if possible, encourage (but don’t require) the employee to speak with HR privately about the matter and promise that HR will do its best to protect the employee against retaliation.

However, the first and last question you should be asking yourself is: why did the employee choose to make a #metoo post to begin with? Chances are they don’t feel safe reporting it via the traditional reporting structure you’ve made available to them, they don’t feel safe from retaliation once they’ve made the complaint, they don’t feel certain that they will be taken seriously or that anything will be done about it. That’s something HR needs to consider as well. How anonymous is your anonymous internal reporting and what effort do you make to ensure employees know about it and use it?

The “Save Local Businesses Act” has passed the House of Representatives, aiming to redefine the standard by which “joint employers” are identified for purposes of litigation. If successful, this bill would mark a return to the pre-Obama administration definition of “joint employer,” which was much friendlier to franchises and large companies with multiple locations. The name of the bill is a good example of political gamesmanship as a return to the more lenient standard would undoubtedly benefit the large corporations more than the Mom and Pop businesses, but similar arguments could be made for locally owned and privately held small businesses with several locations as well.

What do you need to know about “Gen Z” as you get ready for 2018 and beyond? They’ll “only” make up about 40% of consumers by the year 2020 and usher our society into the next era of technological innovation. But if you think you can speak their language just because you spent a few minutes figuring out what Blockchain is, think again. There’s much more you need to know to ensure they fit into your corporate strategy and workforce.

Forget about five or ten years from now, what impact is “cloud computing” having on HR right now? It has substantially cut down on our use of paper, boosted our ability to collaborate and service clients, increased our collective “bandwith” in terms of our ability to handle tasks and even made our hardware lighter by lessening the need for local storage capacity. The cloud also enables us to make more intimate connections with remote workers or clients, level the playing field in terms of access to crucial data, and ultimately, achieve the closest harmony between compliance and consistency that is achievable today.

In the last edition of HR Intel, we asked you how “7 Years” by Lukas Graham is related to HR. This song is about growing up, more precisely about being a son and then eventually becoming a father, but while also maintaining the connection from generation to generation. The workplace is getting “older” these days in terms of the average age of our colleagues, and that means that there will be greater diversity in terms of the number of generations working together in the future, making their ability to communicate a potential HR challenge of tomorrow. As always, it’s good to have some perspective over our mortality and to remind ourselves that it is our responsibility to keep things flowing smoothly from one generation to the next.

We leave you with Dude (Looks Like a Lady) by Aerosmith.