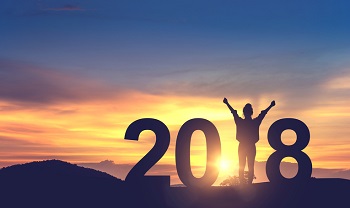 As the calendar turns to 2018, there are a host of new employment laws at the state and municipal levels that took effect December 31 or January 1 of which employers must be aware. Not surprisingly, a massive number of minimum wage increases tops the list. But there are also key compliance updates affecting paid sick leave, recruiting and hiring and more.

So here’s what you need to know to ensure your organization avoids unnecessary trouble in the new year.

People in the red and blue states may not agree on much, but there does seem to be a consensus that the federal minimum wage of $7.25 is too low. Perhaps not surprisingly, there are increases at both the state and municipal levels in California and New York. But Arizona, Montana and South Dakota – not known as hotbeds of liberalism – also raised their state minimum wage rates well above the federal level on January 1.

As a result, millions of Americans will see pay increases effective immediately across the following states:

In addition to those 18 states raising their minimum wage rates, employers doing business in New York City, Seattle and host of cities in between need to be aware of more than a dozen municipal increases that have taken effect with the new year. Fortunately, XpertHR has a handy 50-state chart reflecting these new minimum wage rates.

Employers in a few other states also need to stay on their toes because more state increases are on the way come July 1, 2018. In addition to pending minimum wage hikes in Maryland (to $10.10) and Oregon (to $10.75, $10.50 for rural counties), Nevada’s rate may be adjusted for inflation on July 1, as required by the state constitution.

Meanwhile, no one should lose sight of the fact that the federal minimum wage for federal contractors and subcontractors increased to $10.35 per hour on January 1. In addition, there are new increases in the minimum salaries for overtime-exempt employees taking effect in the following states:

One of the most notable employment trends involves the expansion of employee leave laws. That certainly is reflected this year as several new laws took effect on January 1 expanding paid family leave, paid sick leave and other benefits.

In California, for instance, temporary disability and paid family leave amendments are now effective. Under the amendments, the seven-day waiting period for family leave benefits no longer applies, and the benefits increase from 55 to 60% of an employee’s wages (70% for employees earning less than a certain income level).

California’s New Parent Leave Act also has taken effect. The Act provides up to 12 weeks of unpaid leave for eligible employees to bond with a new child within one year of the child’s birth, adoption or foster care placement. It is designed to cover those employees not subject to the federal Family and Medical Leave Act or the California Family Rights Act, both of which require an employer to have at least 50 employees within a 75-mile radius for coverage.

Other new state leave laws include:

If you’re sensing a California theme here, it’s no accident. The Golden State was extremely active in passing employment laws, and that certainly held true in the recruiting and hiring arena.

Effective January 1, California employers may not ask questions about a job applicant’s salary history or their criminal background during the selection process. The salary history measure prohibits employers from relying on an applicant’s compensation history in determining whether to make a job offer or what salary to offer. However, if an applicant voluntarily discloses his or her salary history (and it must truly be voluntarily), then an employer may take that information into account.

Meanwhile, California’s new “ban the box” law prohibits criminal history questions by employers with five or more employees until after a conditional job offer has been extended. With the measure, there are now 10 states with “ban the box” laws affecting private employers plus the District of Columbia. The others include:

And That’s Not All

California also has expanded its sexual harassment training and posting requirements and extended its Fair Pay Act to cover all private employers. In addition, it has granted greater discrimination protections based on an employee’s military service.

Meanwhile, New Jersey employers should be on the lookout for several possible new laws in 2018 as the state elected a new governor who has pledged to support a $15 minimum wage; stronger equal pay measures; and legalizing recreational marijuana.