Workplace Class Action Settlements Escalated in 2017, but Employers Had Wins Too 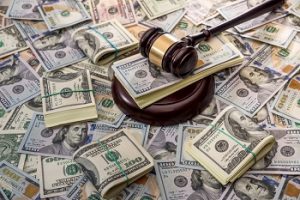 However, the report also included good news for employers.

An overview of workplace class action litigation developments in 2017 revealed several key trends, said Gerald Maatman Jr., a partner in Seyfarth Shaw’s Chicago office who authored the report. The first was that the amount of government lawsuits rose, and the number of settlements went up even more. That was not surprising, according to Maatman. “Given the #MeToo movement and the Trump administration, these issues are crystalizing and on the radar of a lot of people,” he said.

The report shows that overall settlement numbers increased exponentially in 2017 over the previous year, as measured by the top 10 largest case resolutions in various workplace class action categories. Considering all types of workplace class actions, settlement values in 2017 totaled $2.72 billion, a 55% increase over 2016 when such settlements totaled $1.75 billion. The 2017 figure also surpassed the settlement numbers of 2015, which were at the then-all-time high of $2.48 billion.

Another finding was that government enforcement litigation data in 2017 did not reflect the expected pivot from the Obama Administration’s pro-worker outlook to the expected pro-business, less regulation and litigation viewpoint of the Trump Administration. Although the Trump Administration may want to change those dynamics, Maatman noted, its agency appointees either were not nominated in time to influence their respective agencies or were not put into place until the third quarter of 2017. As a result, changes to agency policies and priorities were delayed and government-initiated litigation continued and even increased in some areas.

For example, the US Equal Employment Opportunity Commission (EEOC) filed over 100% more merit lawsuits in 2017 than in 2016. In fact, the EEOC filed more lawsuits in the month of September 2017 than it did in all of the months of 2016 combined. Many of the EEOC’s high-level investigations that started in the last three years mushroomed into the institution of EEOC pattern or practice lawsuits in 2017, showing that such lawsuits remained an agency-wide priority.

But the US Department of Labor (DOL) outdistanced the EEOC results handily. Without a Trump-appointed leadership team in place at the DOL’s Wage & Hour Division (WHD), the enforcement program continued using the Obama Administration strategy and pursued aggressive enforcement activities over the past year, scoring increases in settlements both in court actions and through the administrative investigation process. Notably, the WHD recovered more than $270 million in back pay wages for more than 240,000 workers in 2017 – a solid increase over back pay recovered the previous year.

Given the Trump Administration’s focus on policy changes, employers can expect that many of these enforcement strategies will get a closer look as the new agency leadership teams come into place in 2018, Maatman said.

Despite these intimidating numbers, the report included some good news for employers. In 2017, employers did better on decertification of class actions, and a key ruling by the US Supreme Court makes it harder for plaintiff attorneys to “shop” for a friendly court to file a class action lawsuit.

According to the report, the trend over the last three years in the wage and hour space reflects a steady success rate for class certification that ranged from a low of 70% to a high of 76% (with 2017 right in the middle at 73%). Yet, the key statistic in 2017 for employers was that the odds of successful decertification of wage and hour cases increased to 63%, as compared to 45% in 2016 and 36% in 2015.

Maatman attributes this success to employers putting into place more robust compliance programs, which have paid dividends in fracturing and splintering off plaintiffs in class actions. The focus last year on overtime issues may also have caused corporations to spend a lot of time and resources on compliance, and it paid off.

Finally, Maatman said, class action litigation increasingly has been shaped and influenced by recent Supreme Court rulings, and 2017 was no different. In particular, the Court’s ruling in Bristol-Myers Squibb Co. v. Superior Court of California gave employers cause to breathe a brief sigh of relief.

The ruling supports the view that plaintiffs cannot simply “forum shop” in large class actions, Maatman explains. Instead, plaintiffs must sue where the employer has significant ties for purposes of general jurisdiction or limit the class definition to residents of the state where the lawsuit is filed.

How HR Can Help

Maatman said he can tell when an organization fundamentally has a good HR function – there should be a high number of internal complaints and resolutions and a low number of outside complaints. A forward-looking HR function can detect and fix problems before they go outside to attorneys or government agencies, he said, and that pays big dividends to the employer.

Maatman offered the following advice to HR departments: Don’t rest on your laurels on compliance. He pointed out that since plaintiff attorneys are continually testing new theories and strategies and there is lots of money involved, class actions are not going away. “Always be thinking about how to make the company better on compliance,” Maatman said. “It’s better to spend $1 on risk management than $10 having to defend yourself in a big lawsuit and in case settlements.”