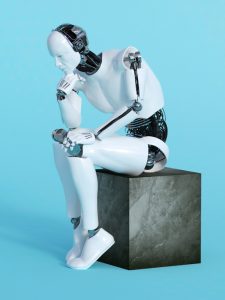 It has been happening for years, right under our collective noses. You always knew it was out there, happening to other people, but you thought it could never happen to you. You figured you’d have some advance notice; that the rug wouldn’t be pulled out from under you. But then it happened.

You lost that human feeling.

You know what I’m talking about. Employees are much less likely to trust you these days than they are anonymous networking apps like Blind and Bravely. Or perhaps they’ve found a safe haven on Glassdoor.com, where the unfiltered opinions of scorned employees are either ignored or addressed with cold-hearted corporate doublespeak.

Combine the declining trust with an increased reliance on Artificial Intelligence (AI) and machine learning and there’s the potential for this to get out of control, and quickly. The World Economic Forum says that AI, already on an exponential growth path in terms of HR adoption and usage, can perpetuate and even expand upon discrimination. Specifically, when algorithms are primed to pursue efficiency and productivity, they can inadvertently and unwittingly discriminate against sick or disabled people. They may even heighten any preexisting biases, built into the system by a biased individual or group.

Heck, are we getting better at communicating with each other or worse? Maybe technology made us poorer communicators, but has simply enabled us to be in touch with each other more frequently? This survey of 1,500 professionals says that 55% of “millennial managers” primarily use “online messaging” (read: chats) to communicate with their direct reports as opposed to face to face, telephone, email or even video conferencing. Only 3% (!!) used the telephone as their primary means of communication. You might as well just become an avatar.

And then there are the rules. And the over-eager, getting-carried-away, do-gooders who make rules like no leftovers at your desk, but fresh, hot food is OK. Really? Do you think you can win the respect of employees when you set arbitrary standards like that? Fresh Pad-Thai from the local noodle shop is OK but last night’s pasta isn’t? No donuts except on Fridays? Is this the land of the free or did I somehow wind up back in the Dark Ages?

Ultimately, I think it’s important that we don’t lose sight of the fact that this is called Human Resources for a reason. It’s not just that humans are a resource, it’s that because you’re working with humans and human problems, you need to be a good human to solve them. You need to have empathy. That’s why the recent XpertHR webinar on Artificial Intelligence reported that only .55% (less than 1%) of HR jobs will be lost to the future of automation. You can’t replicate a person (yet) in terms of their empathy and their ability to problem solve.

But if we keep the people in HR, yet they all become robotic, what was the point of it anyway?

The pre-employment drug test is not long for this world. For most jobs, anyway. There are two major trends occurring throughout the country right now, and they’re on a collision course in terms of how they will impact employers. The first is a relaxation of the attitude around recreational and medicinal usage of certain drugs (mostly marijuana). The second is a severe tightening of the labor market, with employers struggling to find the right candidates to fill open positions. The result, this article argues, is the eventual death of the pre-employment drug screening, with a greater emphasis on merit and productivity.

There is a quiet expansion of LGBT rights occurring at the federal circuit court level. Recently, the 2nd Circuit Court of Appeals (CT, NY and VT) ruled that Title VII of the 1964 Civil Rights Act prohibits discrimination on the basis of sexual orientation. It joined the 7th Circuit (IL, IN and WI), which ruled the same way. The 11th Circuit (AL, FL and GA) on the other hand, ruled that Title VII did not prohibit such discrimination, making this disagreement a potential target for resolution by the US Supreme Court. Making matters even more complicated, the 6th Circuit (KY, MI and OH) recently ruled that Title VII prohibits discrimination on the basis of transgender status, arguing that one cannot discriminate against an employee based on his/her transitioning status without being motivated in large part by sex.

If the words “Browning-Ferris,” “Hy-Brand” or “joint employer” mean anything to you, you should at least take solace in the idea that you’re not alone. The same thing happened to the payroll and compensation people last year with the “final rule” on minimum salary for exempt employees. As for the status of joint employment, well, it’s getting ugly. Congressional Democrats are now calling for NLRB member William Emanuel to resign, after the Inspector General found that he violated conflict-of-interest rules by refusing to recuse himself from the Hy-Brand case.

Emanuel is defending himself (because of course he is) arguing that even though he previously worked for the firm that prosecuted the Browning-Ferris case, Hy-Brand presented a different set of facts and issues. Congressional Republicans have pounced as well, arguing that a former NLRB member, Craig Becker, was not held to the same standard when cases came before the board involving unions. Becker had made his career working for unions prior to joining the NLRB and did not recuse himself when those types of cases were decided.

But wait, there’s more! Another NLRB member is accused of leaking news that the board would vacate Hy-Brand the night before it officially announced the decision. Mark Gaston Pearce, a Democratic-appointee to the board, allegedly let the cat out of the bag at an American Bar Association event in Puerto Rico.

#MeToo Happens to Them, Too

A female partner at Proskauer Rose LLP is suing the firm for $50 million alleging gender discrimination. The firm has shot back arguing that the partner is actually an “owner” of the firm, and thus, the same standards of liability do not apply as though she is an employee. The court hearing the case has now ordered the partner to prove her employee status.

Likewise, Skadden Arps Slate Meagher & Flom LLP recently announced that it will stop forcing “nonpartners” into arbitration regarding employment disputes. Skadden cites the #MeToo movement as the major catalyst for its decision. At least two other major law firms have made a similar announcement within the last week alone.

Google is facing yet another lawsuit alleging gender discrimination, this time by a female developer who made some shocking allegations. Her lawsuit describes Google as a “hypermasculine” culture with constant groping, touching and inappropriate conduct by men toward women. Here are some of the low lights:

Look on the Bright Side

April Fool’s Day falls on a Sunday this year! Woo hoo! No lame office pranks like locking someone out of their computer with an embarrassing screen saver, which I might remind you, is a potential violation of the Electronic Storage and Communications Act as well as the Computer Fraud and Abuse Act. This article gets it right, arguing that April Fool’s Day is terrible for HR (making 2018 a blessing), but also sets some basic ground rules if your employees insist on belated celebrations.

Coming back to those ridiculous HR rules from above, let’s be honest – if HR can get a little over-zealous sometimes, employees can get downright whacky from time to time as well. Check out some of these ridiculous tardiness excuses and then take a few deep breaths when you realize how many of them you’ve heard personally. Personal favorite: my coffee was too hot, so I couldn’t leave for the office until it cooled down a bit. That guy/gal gets it.

Some other cool bits of data in that article as well, based on a CareerBuilder survey. About a quarter of the workers surveyed said they are late at least once a month, and 12% said it happens once per week. The data skews heavily and not surprisingly toward the 18-34 age group (38%), but about two thirds of tardy workers said they stay late to make up for lost time. 60% of employers expect all of their employees to be on time, all of the time. Bless their hearts.

Have an issue with attendance or office pranks? Let us know in the comments section below or on Twitter @hrterminator.