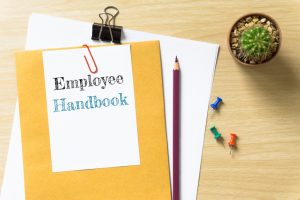 Let’s be fair and assume that when you did your most recent handbook update – historically that would be end of 2017 or early 2018 – you prudently accounted for the dozens of laws that would change around the country on January 1st. Good news: you were ahead of the curve when you did that as many companies do not even perform an annual handbook review. It’s quite horrifying.

The bad news? You’re already behind the eight-ball for handbook updates only three short months later. That’s because more than two dozen additional changes in employment law have already occurred around the country since January 1st, particularly in hot spots like New York, Massachusetts, New Jersey, Maryland, Colorado and several major municipalities, including:

And that’s only part of the bad news, because the volatility continues through May and June with Utah, West Virginia, Oregon, Washington State and even Alabama getting in on the action.

And if you’re in California – home of the most complicated employee handbooks to begin with – you know that rapidly-approaching July 1st is one of two annual employment law overhauls common to the Golden State. If California were a snake, it would molt its HR skin almost entirely twice per year.

On the bright side, XpertHR has covered this topic in great detail with big updates to our Employee Handbook tool on a regular basis and even a 2018 handbook update blog in March, focused on some of the modern handbook policy update trends like pay equity, predictive scheduling, sexual harassment, pregnancy accommodations and employee leaves.

Thus, a modern employee handbook truly needs to be a living, breathing document in the sense that:

A truly modern handbook is perhaps a digital handbook to which employees have access across several devices, which lives in an ecosystem where HR and legal departments work collectively toward comprehensive but employee-friendly policy language. That digital functionality enables seamless updating and the existence of a digital “master” copy to which HR professionals can refer employees when they have straightforward questions about their rights and responsibilities.

If your company is in multiple states, you also potentially have the “macro vs. micro” problem in the sense that you can either have one standard for everyone at the most employee-friendly level (macro) or a location-specific administration of employee rights and responsibilities (micro), requiring lots more local knowledge and fact-specific troubleshooting of employee questions and concerns.

And even if you are able to pull all that off – your handbook is digital, it’s up to date, it’s accurate and compliant and it solves the macro vs. micro puzzle for multi-state companies – you’re still left with the single greatest challenge around employee handbooks that HR professionals routinely face: getting your employees to actually read it.

Give Me Pay Equity or Give Me Death

Salary history is the new “don’t ask, don’t tell.” Not only can employers get in trouble for asking the question – if not legal trouble then there is potential backlash from applicants and competitors along public relations lines – but employees should take the initiative to protect themselves by not offering up the information when it’s not solicited.

Historically, prudent job interviewers generally have developed ways around these types of questions anyway. “What are your salary expectations for this job?” is a different way of obtaining a similar data point from an applicant, but without running afoul of a salary history question prohibition.

Currently, California, Delaware and Oregon have restrictions in place at the state level, as well as several municipalities, including New York City. In July 2018, Massachusetts, San Francisco and Westchester County, New York will join the party, further spreading these prohibitions around the country. If the trend follows other recent patterns in employment law like paid sick leave and ban the box, it is just getting started.

But restrictions on questions about salary history are only one aspect of the pay equity equation. “Pay equity” laws broadly aim to close the persistent wage gap between men and women and in some cases, across many other protected classes as well. In New Jersey, for example, the Diane B. Allen Equal Pay Act will apply across any and all categories of employees that are protected by the New Jersey Law Against Discrimination (LAD).  The new law will allow employees to sue for up to six years of back pay and provide for “triple damages” as of July 1, 2018.

Then there’s the 9th Circuit Court of Appeals, which recently delivered a decision in a gender discrimination case, finding that a female employee’s 5-percent pay increase over what she earned in her previous job did not insulate the employer from her discrimination claim since male co-workers were earning much more for performing similar work. That type of ruling underscores the responsibility employers have – not only to stop asking about past salaries, but to be transparent and audit its pay practices in a meaningful way.

Here’s a question that thousands of HR professionals are asking themselves these days, “Can we still test job applicants and employees for marijuana?”

Unfortunately, the correct answer to that question (“it depends”) provides little satisfaction and potentially high legal bills. A comprehensively correct answer is one that requires several questions to be answered first. At the very least, the decision of whether or not to test a job applicant or employee for marijuana depends on the following:

Given the increasingly complex regulatory scheme when it comes to the legality of marijuana, together with the likelihood that widening legalization will lead to increased usage among adults, perhaps the best question is not whether you can test a job applicant for marijuana. After all, modern American companies increasingly report difficulties with finding qualified applicants for their open positions. Given that reality, perhaps the better question is should you test an applicant or employee for marijuana?

A former USPS worker was fired after fraudulently claiming that she had non-Hodgkin’s lymphoma and that she required time off from work to treat the condition. After being granted leeway and accommodations, the USPS ultimately grew suspicious of the worker’s claim when one of her “doctor’s notes” contained a misspelling of the doctor’s name. Reasoning that a physician would be unlikely to misspell his or her own name, the USPS started an investigation.

Ultimately, the investigator found that the employee was never treated at any of the facilities she claimed to be visiting for her condition. As a result, the USPS determined that this cancer-free worker was a cancer around the office, but the federal government added insult to fake injury by indicting the employee for forgery, wire fraud and possession of false papers aimed at defrauding the United States. Capping this strange and pathetic tale was the employee’s courtroom admission in the criminal trial: she faked the whole thing because she was upset at being passed over for a promotion!

Think that’s bad? Here are some more HR horror stories. Personal favorites: the drunk daycare worker sneaking sips of liquor in a Gatorade bottle while dishing out milk bottles to toddlers and a hotel supervisor who marked rooms unavailable to guests when he wanted to sleep off a late night bender.

So remember, as hard as HR seems sometimes, it could always be a lot worse.

Got any of your own HR horror stories to share? Or perhaps you just want to vent about your “new” handbook already being old? Let us know in the comments section below or on Twitter.