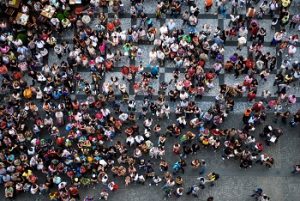 “Too often we’re hearing I went to HR and nothing happened,” says Equifax HR Chief Coretha Rushing at the SHRM 2018 Annual Conference in Chicago. As a prime example, Rushing pointed to a large group of women at Nike turning to the media to share their story rather than human resources. The Nike women felt that HR was turning a blind eye to bad behavior by high-level male executives.

Rushing, who chairs SHRM’s Board of Directors, told an overflow crowd of nearly 20,000 about the need to make people more comfortable going to HR. They can accomplish this, she said, by never forgetting the “human” in Human Resources.

In being human, Rushing drew an analogy to her many trips through airports. She noted that there are two types of people she sees while traveling:

In HR, she observes that people similarly must adapt in the face of the unexpected or when a plan must be altered. And those who are most adept at doing so are the most successful.

Quoting George Bernard Shaw, Rushing said, “Progress is impossible without change, and those who cannot change their minds cannot change anything.”

Following Rushing to the SHRM stage, Munoz said, “The answer can’t always be no.” As an example, he cited a longtime United gate employee who became disenchanted when a couple of coworkers seemed more interested in ushering a passenger who had suffered an apparent heart attack out of the jetway than the passenger’s well-being.

The coworkers were motivated by ensuring that the plane left on time. But, Munoz said, there are times when caring simply must take precedence over efficiency. Thus, this was an instance when United’s rules and procedures trumped common sense.

Along similar lines, Munoz explained that employers need to communicate with empathy. “It’s not only what you do,” he said. “It’s how you do it.”

The United CEO added that communicating with your employees cannot be impersonal either. “Posting something important on the company intranet with a general statement is not communication,” said Munoz.