Is Age Discrimination Coming Out of the Shadows? 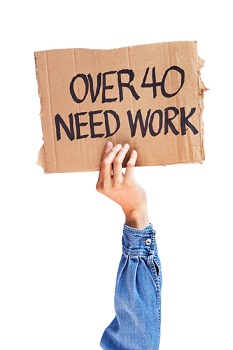 Recently there have been some emerging media reports about older workers feeling discriminated against, both during the hiring process and in some high profile layoffs/reorganizations (e.g. IBM) where older workers are being shown the door in favor of younger colleagues who command lower salaries.

It’s not a new issue, but given the current cultural climate, it’s one that may pick up steam much as the #MeToo movement has. Could an #AgingToo movement be looming?

Some think so and also believe that it’s about time.

In a recent Forbes piece, Ashlea Ebeling writes: “Maybe older ‘experienced’ workers need their own Me Too Movement.” She’s not alone in that thinking.

“I believe that age discrimination is the most common form of discrimination throughout the U.S. across virtually all industries,” says David D. Schein, MBA, JD, PhD, a professor and HR consultant. The only exceptions, he suggests, may be in retail and fast food.

Still, says Schein, at least for now, “While other forms of discrimination seem to get the attention of both the press and the administrative agencies, age discrimination is actually increasing due to the lack of attention being paid to it.”

His perceptions are supported by data.

Sherri Affrunti is a partner in Reed Smith’s Labor, Employment & Benefits group, based in Princeton, New Jersey. She points to a June 2018 report from EEOC Acting Chair Victoria Lipnic, which indicated that “age discrimination remains a significant and costly problem for workers, their families, and our economy.”

The issue is compounded when bringing in other areas of potential discrimination. “The EEOC report cites that in 2010, the number of age discrimination charges filed by women surpassed those filed by men for the first time,” says Affrunti. “Notably, that trend continues and may pick up even greater steam in the #MeToo Climate.”

As with any habit or activity we wish to avoid, minimize or eliminate, awareness is step one. Data may help. What’s the breakdown of age demographics of your new hires, your promotions, your terminations and layoffs? Do the numbers suggest some bias?

Review your staffing materials and communications. Facebook, for instance, has come under fire for allowing companies to target potential candidates based on age. Despite the fact that such targeting may be a good marketing practice, in hiring it can raise red flags. Amazon, Cox Communications and T Mobile are just a few examples of employers that have been cited for their use of age restrictions in Facebook job ads.

Even when casting a wide net for candidates, the language used in job postings and ads may be problematic. Phrases such as: “recent graduates,” “digital natives,” “high energy level,” and even “overqualified” may be code words that suggest an employer may be showing favoritism toward younger candidates.

However unconscious this bias may be, it is still problematic.

“Any time that employers allow biased thoughts to infiltrate their hiring, promotion and termination practices, it’s a problem,” says Affrunti. In addition, she says employers should be ensuring that their training efforts address all forms of potential harassment and discrimination—including age.

Affrunti also recommends that these training efforts should be in-person, not electronic. When that’s not practical, of course, “it’s better to train with a computerized program than not at all,” she says. But, “ensure that they are updated regularly and that they maintain records regarding the training—including both attendance and substance.”

Risk needs to be managed at every step of the employment relationship—from recruitment to termination. Affrunti notes that discharge claims remain the most frequently filed ADEA charges—followed by claims of age-based workplace harassment.

The Benefits of Experience and Longevity

Bias toward older workers may stem from misconceptions that have become common. As Robert Teachout pointed out in an XpertHR blog post last year, these misconceptions may be based on the following stereotypes:

However, Teachout cites Peter Cappelli, co-author of Managing the Older Worker, who points to benefits like finely honed soft skills, loyalty, high motivation, continued dominance in the workforce and interest in continual learning as evidence that this demographic can provide benefits for employers that increasingly find themselves faced with talent shortages.

The bottom line: organizations, HR professionals and hiring managers should be focused, first and foremost, on hiring the best candidate for an open position—regardless of demographic characteristics like age that are not directly tied to the ability to perform the job.