A member of the XpertHR team is available to chat.

9 Steps to Creating an LGBT-Friendly Workplace 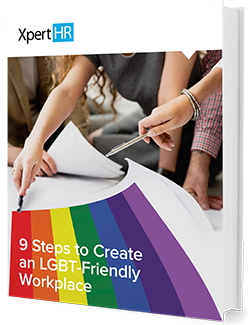 The fight for equality based on gender identity and sexual orientation is proving to be the next frontier in the fight for equal rights. In recent years there has been a clear shift in public perception of, and civil rights for, those individuals who identify as lesbian, gay, bisexual or transgender (LGBT), which has significant implications for employers and the workplace.

In a recent 2016 Executive Employer Survey conducted by Littler, the greatest year-over-year change was in the expectation of discrimination claims in relation to LGBT rights in the workplace which rose a staggering 43%. The EEOC has sent a clear signal that discrimination based on sexual orientation is among its top enforcement priorities.

21st century employers must be prepared to even the playing field when it comes to gender identity and sexual orientation, and ensure that all persons are treated fairly and equally in the workplace.

Download this eBook to learn how to make your workplace more LGBT-friendly in nine simple steps.

XpertHR is part of the LexisNexis® Risk Solutions Group portfolio of brands.