Get a FREE trial

Your browser does not allow automatic adding of bookmarks. Please press Ctrl/Command + D to add a bookmark manually.

Our new infographic dramatically shows the disconcerting enforcement trends facing employers throughout the US. Over the last several years, US government agencies have significantly stepped up enforcement efforts against employers from all angles, costing employers millions. The Equal Employment Opportunity Commission (EEOC), the Department of Labor (DOL) and the Immigration and Customs Enforcement (ICE) have been very candid about their promises to execute their enforcement strategies targeting noncompliant employers and they are making good on their promises.

In 2012, a whopping 99,412 charges were filed with the EEOC and more than $365 million was recovered against private employers. Furthermore, in 2011, the DOL increased its wage and hour investigators by 40% and collected $224 million in back wages. In the last five years, there has been an incredible 600% increase in Form I-9 audits by ICE. And last year, ICE sought $12.48 million in administrative fines for illegal employment practices. Further, ICE worksite investigations resulted in the arrests of 240 managers, supervisors and HR employees harboring or knowingly hiring illegal aliens.

Employers need to be especially proactive given this active enforcement environment, to ensure that their employment practices are not on the government's radar. No industry is immune from government enforcement activities. For instance:

HR can minimize exposure to such enforcement efforts by implementing policies prohibiting discrimination of any kind based on race, color, religion, sex (including pregnancy), national origin, age, disability or genetic information. They should also ensure that they are properly classifying employees under the FLSA. Lastly, HR must verify the identity of all new employees and establish that new hires are authorized to work in the US. 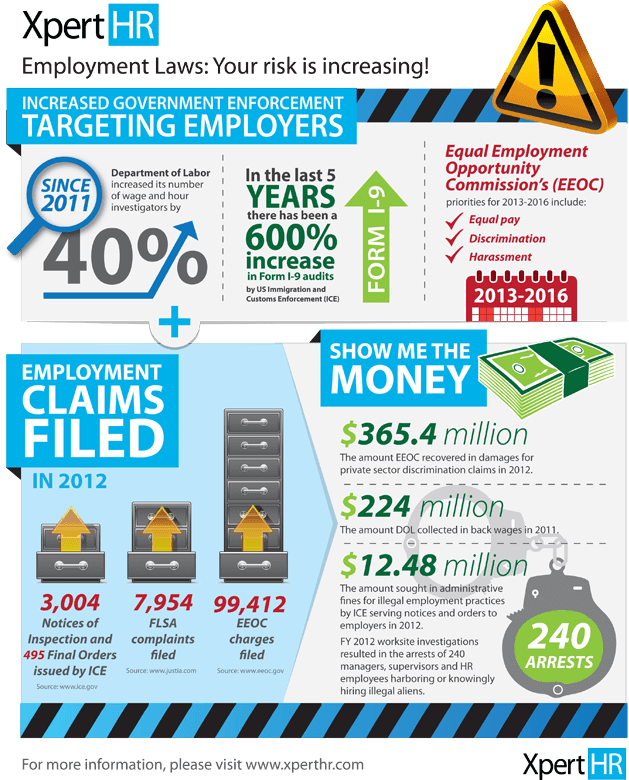 Was this article helpful?

Status
This article has been archived and is available for reference only.